I bought a Happy Hacking Keyboard in college (10+ years ago now) and at $250 or so, it was considerably out of my budget. I originally had my eye on a Das Keyboard with Cherry Blue key switches, but the unit that I was shipped suffered from a key transposition issue (which has since been remedied in later revisions) forcing me to return it. After that I decided to splash a bit more cash on what many considered an end-game keyboard at the time. I do not regret it. I'm typing this article on that same HHKB and it still looks (sorta) and performs just like the day I bought it. Most craftsmen invest heavily in their tools; why should programmers be any different?

I use Emacs. For those unfamiliar, it's a text editor / OS 😉 that was originally designed on / for the Symbolics Space-cadet keyboard [1979].

The Space-cadet had more modifiers than most keyboards of its era or any other. And Emacs makes use of these extensively; especially CTRL and META. SUPER and HYPER are used to a much lesser extent. On a standard US QWERTY board the CTRL key is in a position that leads to it being pressed primarily by an awkwardly contorted pinky finger, potentially causing an uncomfortable condition dubbed Emacs pinky. This has prompted many Emacs users to remap their keyboards to reduce the chance of repetitive stress injuries.

QMK firmware even has a feature named after the Space-cadet. Which causes the modifiers (shift and alt) to act as a modifier when long-pressed, but type a parenthesis / square bracket / bracket when quick-pressed alone or in combination. Although it appears to simply be an optimization made by Steve Losh when attempting to recreate a modern Space-cadet, it's not any less useful. I've enabled it on all of my Tokyo60s.

Occasionally I'll accidentally type a parenthesis when meaning to do something else, but it happens so infrequently and the benefits are so great that I'd absolutely recommend this to anyone who programs a lot.

From Steve Losh in A Modern Space Cadet

The Space-cadet was succeeded by the simpler, but still specialized (and very cool!) Symbolics Keyboard in 1983. Note that the CONTROL key is still placed next to the (very long) spacebar and CAPS LOCK is 1u and even looks to be recessed 😆. 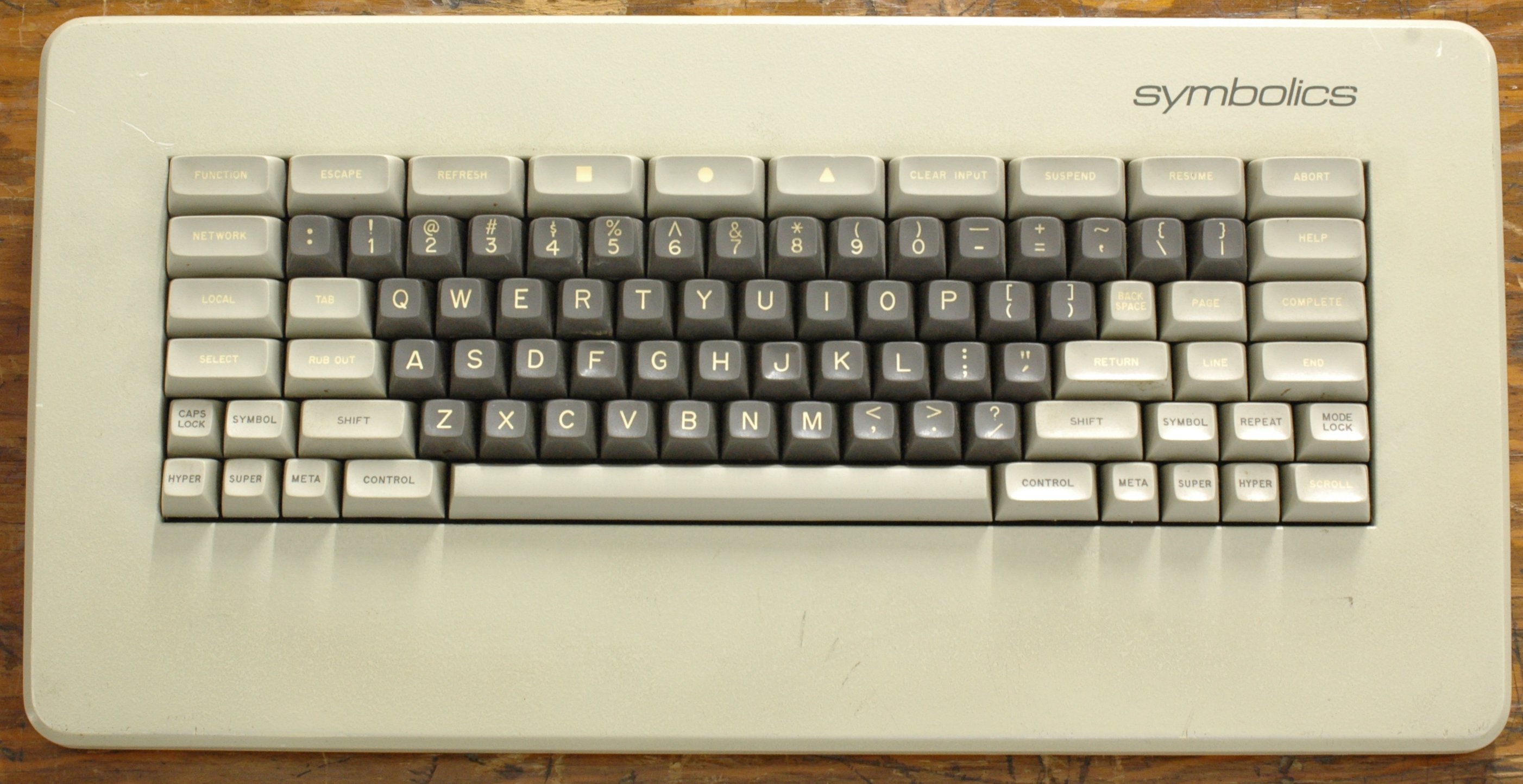 # Back Down to Earth

I was interning at IBM when I found a prime example IBM Model M (my first mechanical keyboard) abandoned in a lab that I made into my daily-driver during the time I worked there, but I've never come across anything as exotic as either of those two legendary Symbolics boards. In order to avoid RSI on a standard QWERTY, I would swap CAPS LOCK and CTRL in software, but this isn't a great solution because it's not portable. If you're working on a new machine, then you need to do tedious OS-specific configuration in order to get back to a productive state. The HHKB layout takes this common desire of Emacs users into account by placing CTRL right on the home row (where it belongs 😜). Of course over the years muscle memory has set in and now I feel compelled to bring a keyboard with this unique layout with me whenever I have real work to do.

This is my favorite layout. The HHKB layout; most similar to the Sun Type 3 keyboard.

If you haven't used a 60% layout before and can live without dedicated arrow keys / a numpad then I highly recommend it. I find that the smaller form-factor allows your mouse to sit in a much more ergonomic position on your desk.

Don't look too close at the dust, grime, and hair stuck to this one. It's much more noticable in the pictures than it is in person. Still needs a good cleaning though 🚿 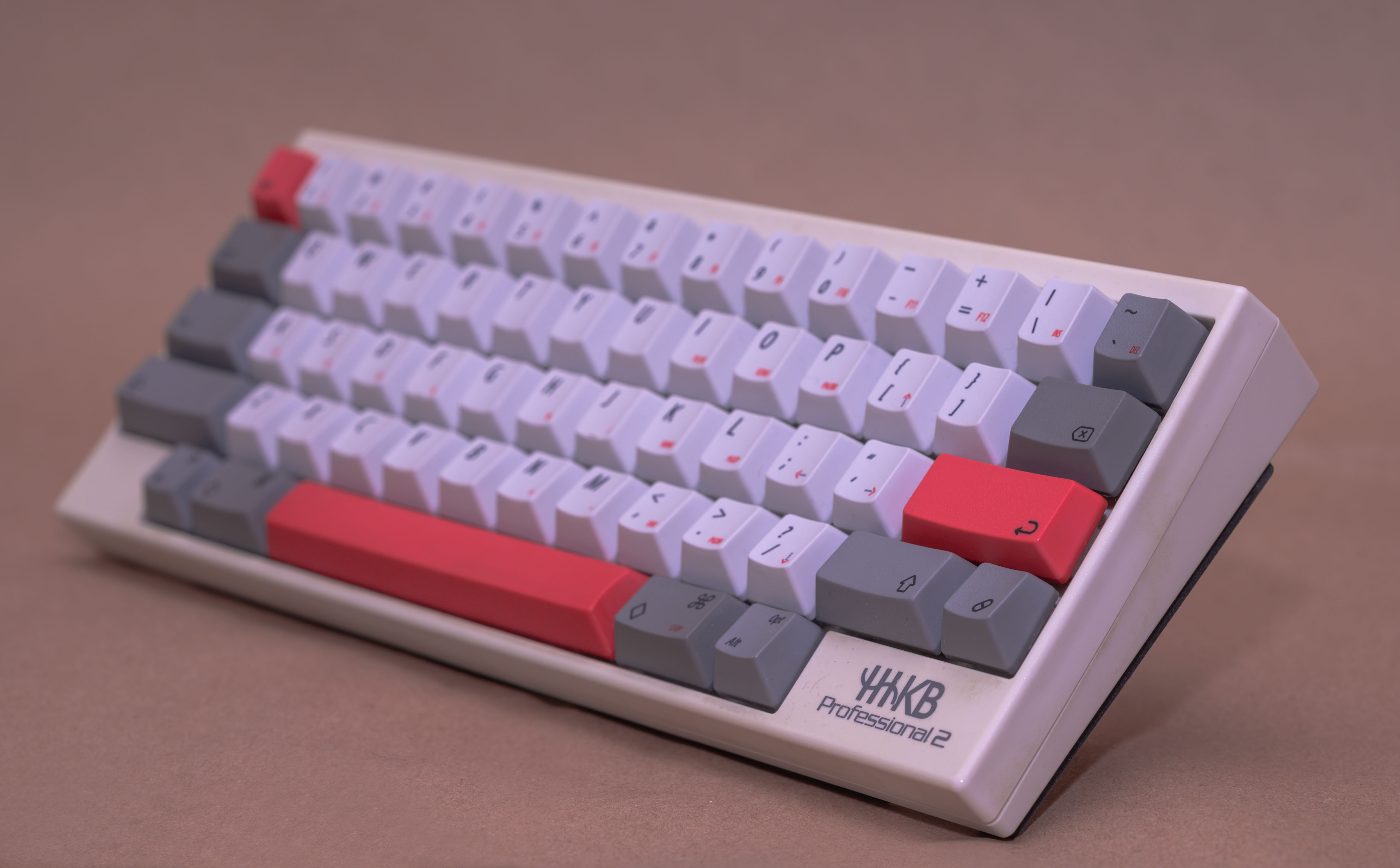 Topre are not mechanical key switches in the traditional sense. They're electrostatic capacitive and unique amongst Cherry MX and derived switches. They're extremely satisfying switches. They have a distinctly soft thunk. The issue with Topre switches is the availablity of key caps. As most key caps are Cherry MX compatible you're limited in your styling potential. 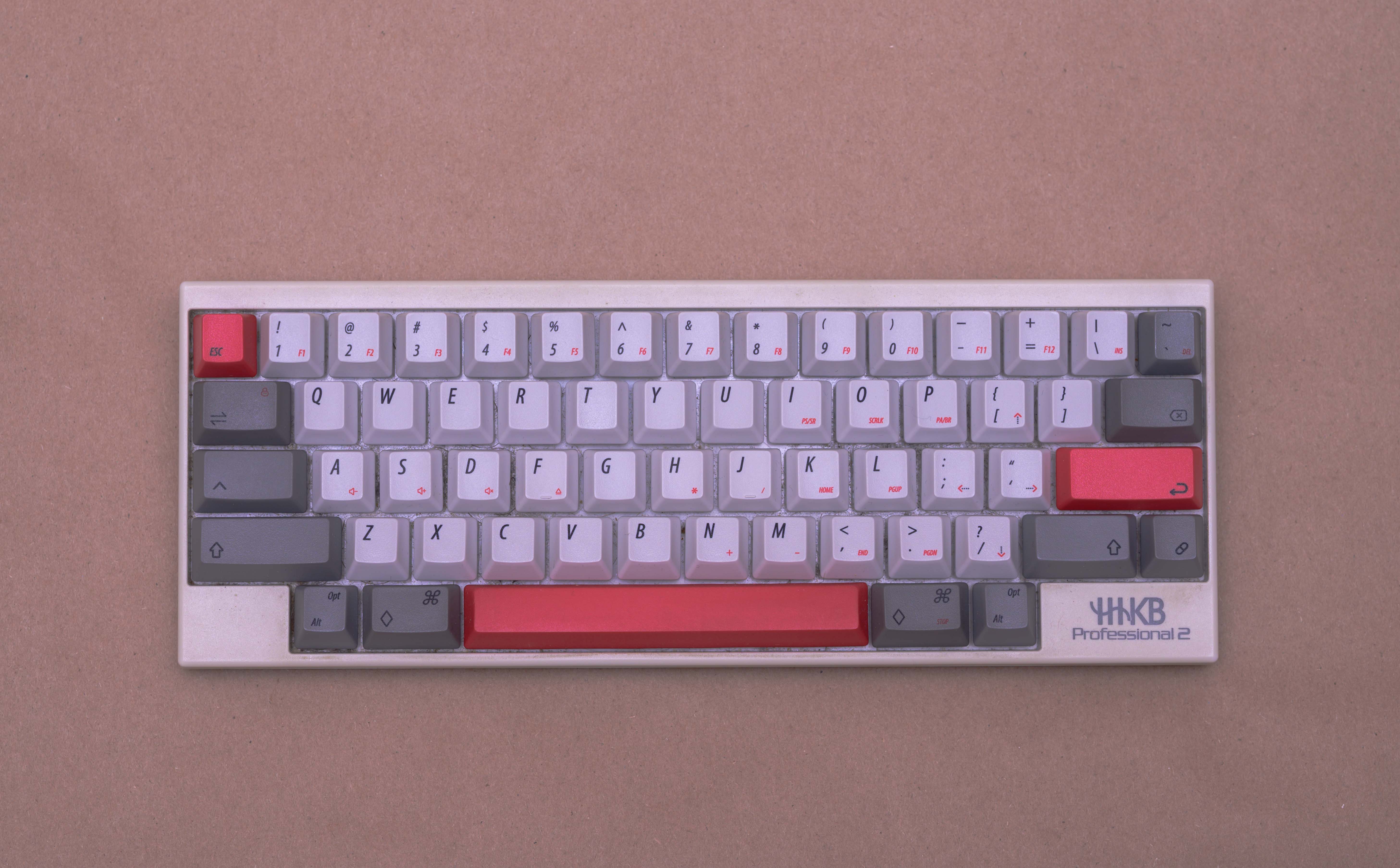 The Tokyo60 is a compact hhkb-style board with a sleek, seamless design. Constructed with two pieces of 6000-series aluminum, the case is machined at a 5-degree angle. This angle, combined with the cherry-profile keycaps, is optimized for an ergonomic feel. Built into the aluminum case, the integrated plate adds even more stability. Thanks to the hot-swap sockets on the pcb, you can swap in new switches in minutes without any soldering—so feel free to try a new feel whenever you want. With a fully programmable layout and rgb lighting, the board can be customized any way you like.

To me this sounds like the perfect modern equivalent of the HHKB; so I picked one up.

The Tokyo60s are programmable and I've customized mine. I provided some info on my QMK Configuration in a previous post. 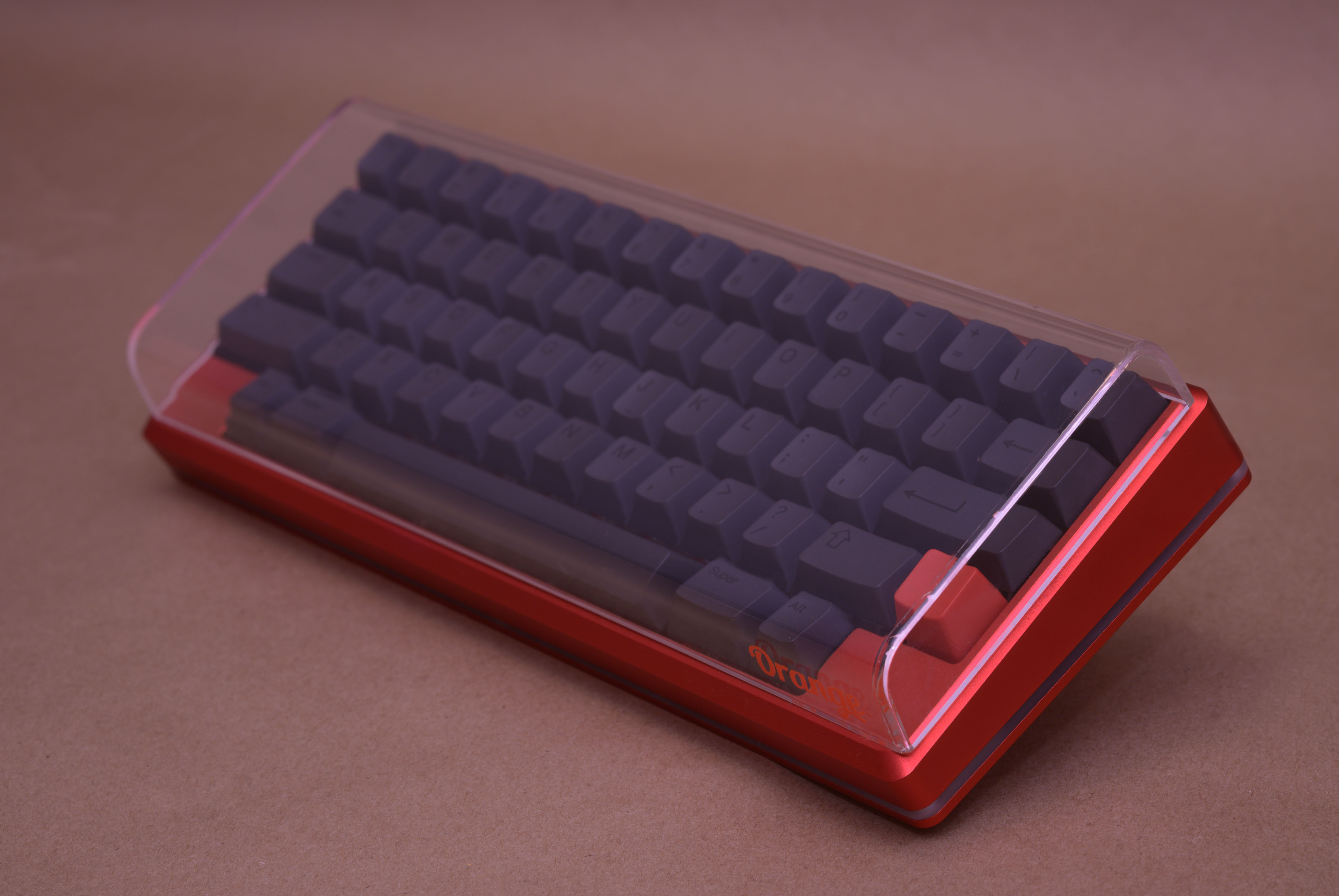 These switches are better Cherry Browns. Tactile with a good weight. Slightly heavier, but that's my preference.

Sounds pretty bad to my ear with the stock Cherry-profile key caps. It sounds much better with high profile caps.

I liked it so much I bought it twice. Plus I needed some more real-estate to support my key cap addiction.

It's disapointing to note that Drop (formerly Massdrop) messed this one up pretty seriously. The boards were shipped without a working bootloader and many came without an HHKB layout mapped. Without a bootloader there is no way to flash the firmware and customize your keymap or enable any additional features provided by QMK. To add insult to injury, the provided screws were not long enough to secure the case-back with the acrylic diffuser in place.

Luckily the community came through with a solution for the bootloader that I employed to great success. The screws were easily replaced with a trip to the hardware store. 3mm x 10mm metric phillips flat machine screws did the trick. 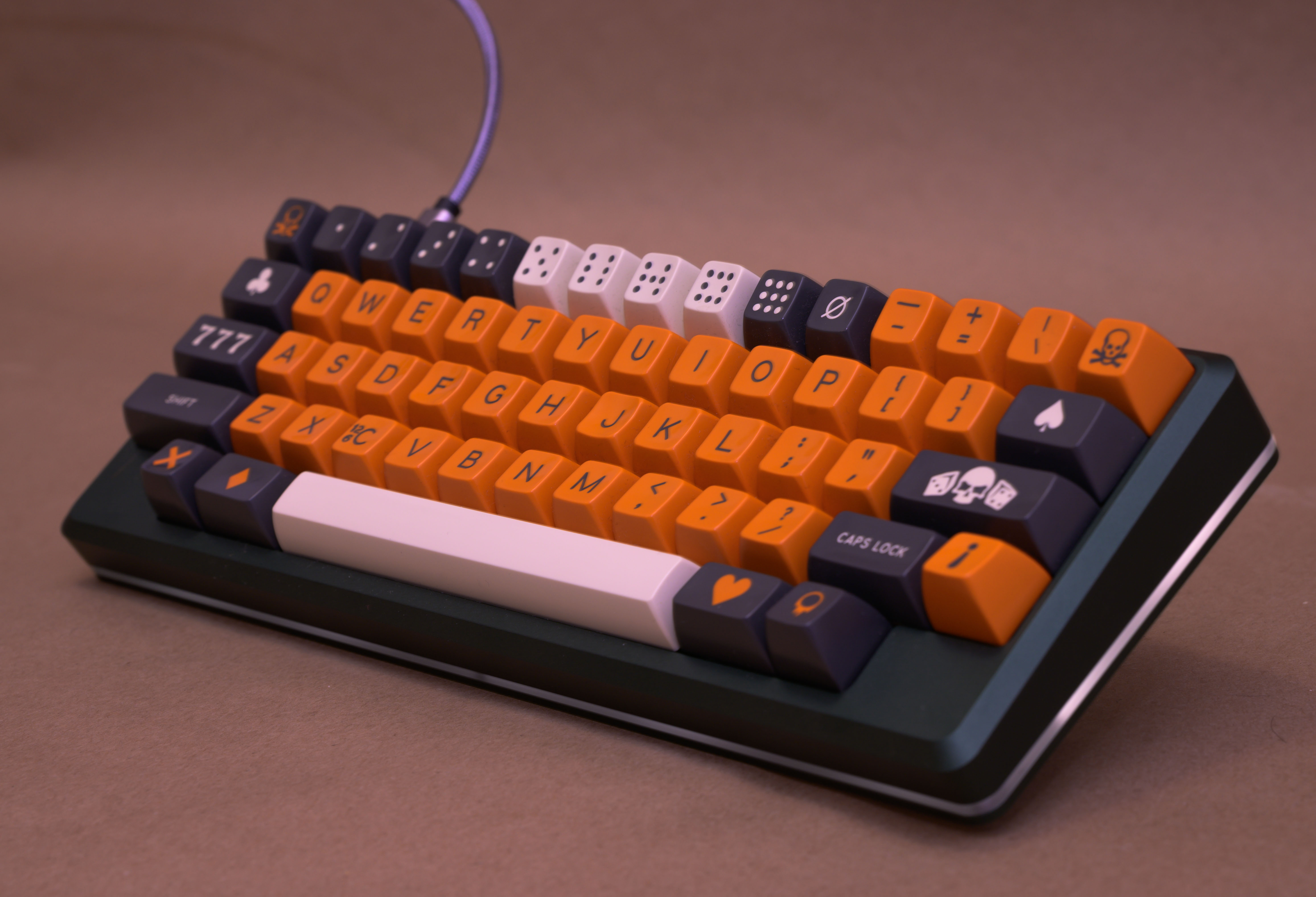 These switches are pretty unique in their usage of a thick click bar. They're not at all IBM buckling springs, but they're probably the closest analogue at the time of writing. They're pretty loud, but by far the most tactile switches that I own. 60g feels heavy on these. In a nice way.

Originally I ordered Aliaz 100g switches for this board, but since using them I think that I'd prefer something with a lower actuation force. They're very smooth and quiet switches - not at all mushy, but due to the weight and limited tactility I occasionally miss a keystroke. A 100g switch is certainly unique, but I plan on replacing them with 67g Healios switches. 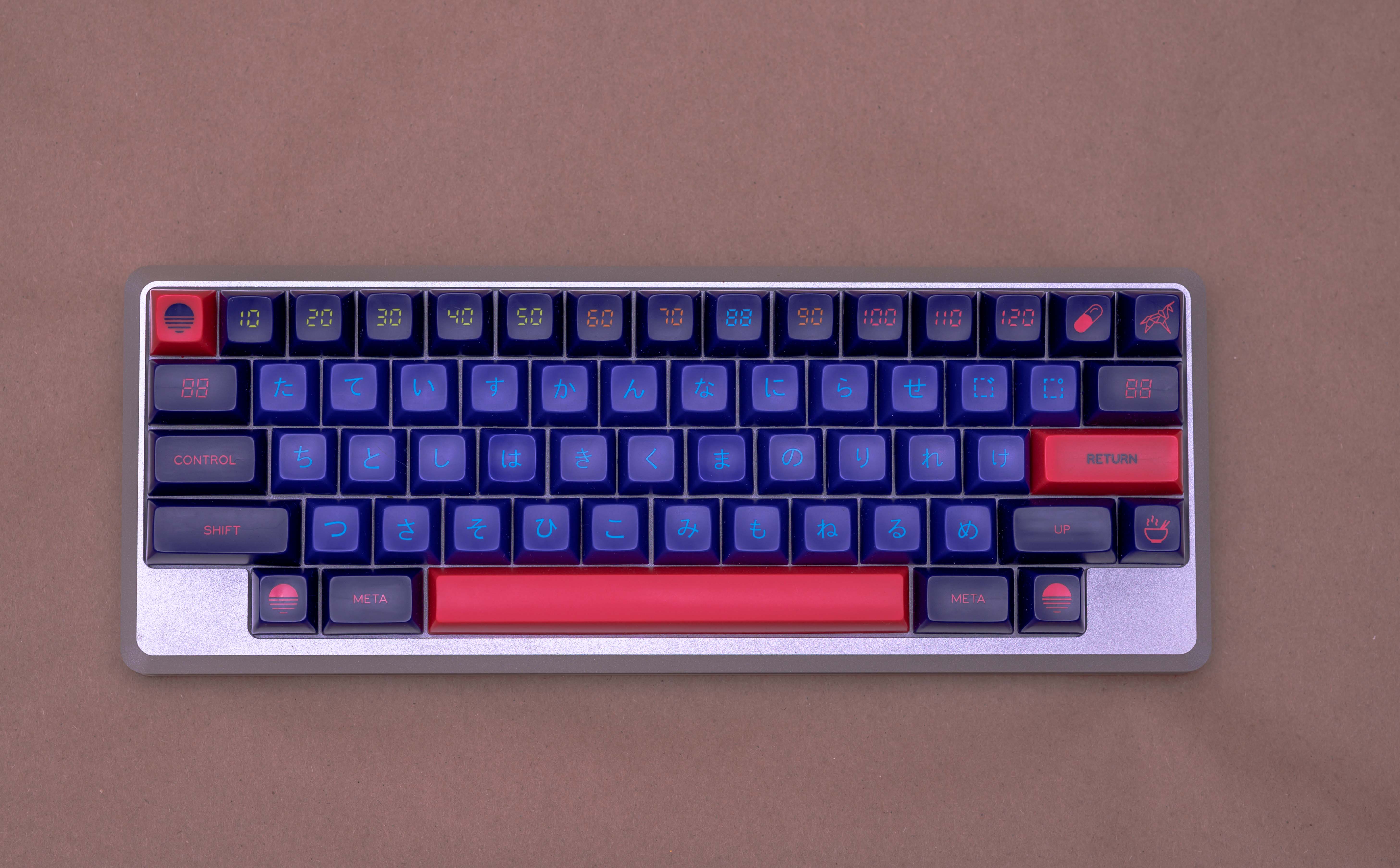